The Cosmic Mirror and the Carrie Prejean Controversy 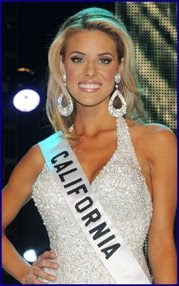 This week, Donald Trump announced that Miss California USA, Carrie Prejean, will retain her crown. Ms. Prejean’s crown was at risk because it was believed she failed to reveal to Miss USA pageant officials that she had taken nude photos. The story also attracted a firestorm of activity because one of the Miss USA judges, Perez Hilton, an openly gay gossip blogger, had given Ms. Prejean especially low scores, ostensibly in reaction to her response to his question about whether or not she believed in gay marriage. In response to his question, Miss California said, "We live in a land where you can choose same-sex marriage or opposite. And you know what, I think in my country, in my family, I think that I believe that a marriage should be between a man and a woman. No offense to anybody out there, but that's how I was raised."

The image of our own gender role is another compelling force at work in this story. Gender roles are our mental image of what it means to us to be a man or a woman, and we use these images to judge ourselves and to judge others. Each gender has its own stereotype: for women, it has been Barbie – the personification of the extreme feminine – and for men, it has been Rambo – the personification of the extreme masculine. To live up to these stereotypes, women must submerge their stereotypical male attributes, and men must submerge their stereotypical female attributes. Many of these images are not in our awareness, and when they are not, they are often projected onto others, usually of the opposite gender.

That being said, nothing could be more stereotypically female than the winner of the Miss USA pageant! And contestants are judged on that stereotype. When Carrie Prejean voices her strong opposition to gay marriage it crushes what we envision to be our image of what is stereotypical female – someone who is nurturing and accepting of others, someone without prejudice or intolerance. Psychologist Jolande Jacobi, a colleague of Jung’s, felt that each of us is actually trying to heal our divided or split-gender self. When our stereotypes are shattered, emotions run high – particularly if we cannot tolerate having self-doubt about the certainty of our beliefs. Carrie Prejean leaves the impression that she has no doubts about the certainty of her beliefs. Not only does this shatter our stereotype of a Miss USA, it also fuels the split within all of us to be a pure and protected member of an in-group and the fear we have of those who are unlike us and whose opinions may differ from ours. This is the cosmic mirror at work.
Posted by Gary Gemmill and George Kraus: at 4:14 PM 1 comment:

Gary Gemmill and George Kraus:
Gary Gemmill, Ph.D. is a professor emeritus of organizational behavior from Syracuse University. He has presented and facilitated personal development workshops all over the world. George Kraus, Ph.D. is a diplomat in clinical psychology in private practice and is on the faculty of the School of Professional Psychology at Wright State University. He is also the author of "At Wit's End: Plain Talk on Alzheimer's for Families and Clinicians" published by Purdue University Press.